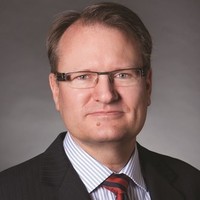 As CoBank’s president and chief executive officer, Thomas Halverson is responsible for implementing the bank’s strategic and business direction as set by the board of directors. Previously, he served as CoBank’s chief banking officer where he was responsible for the bank’s Agribusiness and Rural Infrastructure Banking Groups as well as the Banking Services Group and corporate communications. Mr. Halverson is the chair of CoBank’s Management Executive Committee.